Multiple patrols on same day are being counted as multiple days

My team is using SMART 7.4 [the pre-release version] (but this also occurs in SMART 6, so it doesn’t seem to be a version bug). They have been encountering a problem that just recently caught my attention, where multiple patrols on the same day, by the same author, are being counted as multiple days (see images below for example). 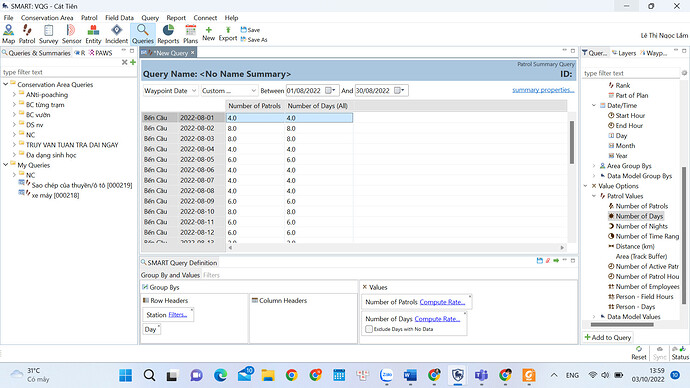 The issue occurs (they think) when the person uses one smart phone (with SMART mobile) starts and stops the track multiple times in one day. But instead of just being recorded as multiple tracks in one day in SMART Desktop queries, it shows as multiple tracks across multiple days (even though the start and end date remain as 1 day).

Any insights or help into where things might be going wrong is appreciated!!

I think there are a couple of issues here. Let me know if I am not understanding correctly.

The summary query you sent the screen shot for is accurately representing your data. Each time a “Patrol” is started in mobile it counts as a “Patrol Day”. So if the same person starts and ends four patrols on one day (i.e., on mobile Start patrol>collect observations>end patrol, repeat) this will count as both four patrols and four patrol days. With the way your data are at present, you could get a more precise idea of the patrol effort by using patrol hours instead of days, as this would represent the precise amount of time spent on patrol.

Based on your description, it sounds like this issue is being created by people starting and stopping patrols, then initiating new ones. I am not sure the reason they are doing this, but there are several options to prevent the “creation” of multiple patrol days in the scenario you describe. The “Change Patrol” button on SMART Mobile allows you to pause the patrol (and the GPS), and also make other changes like change of transport type, which with previous versions of mobile/cybertracker, was one of the main reasons for starting and stopping patrols.

As the screen shots show, the patrol data are not spanning multiple days, but rather you are creating multiple patrols on the same day by the same person. If you avoid starting and stopping patrols as I have described above this will not happen. For the existing data, you can combine each of the patrols that should be all part of one patrol using the “Merge Patrols” option. Just shift/control-select each of the patrols that should be part of the same patrol, then right click and choose “Merge Patrols”.

Let me know if I am not understanding all the issues correctly.