Hi everyone, we have patrol tracks that include both vehicles and foot patrols within a single track. While I can manually filter and classify these differences pretty easily in R via the speed between points in a track timeseries, my team is not R savvy and the code doesn’t play nicely with SMART plugin (or at least I haven’t found a way to make it compatible).

Is there a way to do this in SMART? Basically, we just want a simple classifier to say if tracks are moving <5km/h it is a walking patrol track, else >5km is vehicle patrol track.

Any feedback is great!

I am not aware of a way to do this. SMART doesn’t store a value in the patrol data table for the speed between each point, so there isn’t really a way to filter based on point to point speed. The best way to do this is change the transport type in the patrol metadata when the patrol is being conducted. This is pretty quick and easy in SMART Mobile now.

Our patrols already have this setting in the data model to switch between patrol types, but the rangers often forget to do so, which leaves our data managers with hours of data cleaning time.

I guess I will have to write the R code to do it after all.

@Russell-SVW Did you actually include it in the data model? Or are you changing the patrol type using “Change Patrol”? The latter is not part of the data model and will split your patrol into different legs (ie, sections) based on the selected transport type (for your example). I recorded a brief video to demonstrate here: Loom | Free Screen & Video Recording Software | Loom

Hi Russell,
To add onto what Rich and Drew shared, there are a couple things that can help when the rangers forget to change the patrol:

Then clicking ‘Convert to multi-leg patrol’ in the popup window: 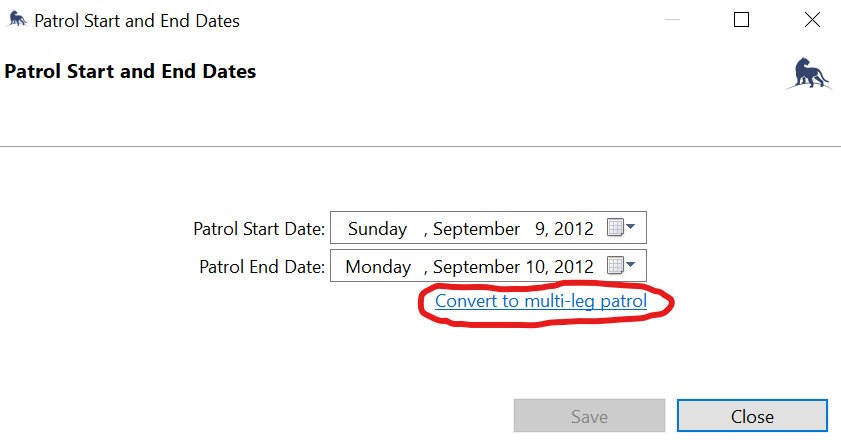 From here you can split the patrol out into different legs with different transport types and end up with the same result as Drew showed in the SMART Mobile app:

I hope this helps,
Matt

@drew.cronin I didn’t write this team’s data model, but they informed me that there is a simple feature that allows them to switch between foot and vehicle legs of a patrol. If the change patrol feature is the usual method, its probably what they use.

@matt.hron Thanks! I think this may be along the lines of what they are already doing to clean the data. I just wanted to automate the process with a simple run of code, or click of a button to identify all the legs of a track (based on speed [distance/time] I have said in the original post), and convert them all at once to “vehicle” or “foot”. That way it prevents our data managers from going manually through all the data to edit them.

In any case, I will forward this information to them and see if it helps for now!

Thank you all for the input!